The Cartiera S. Rocco Mill produces white and coloured tissue paper, which is then used for toilet paper, household and bathroom rolls.
The paper is produced in mother reels (jumbo roll) which are destined for the paper-converting industry and for the production of final products of mass consumption, such as: paper napkins, toilet paper, industrial rolls, paper towels, etc.
The raw materials which are used for production mainly come from recyclable and waste paper, and partly from pure virgin pulp.
The mill works around the clock, 330 out of 335 days a year, and has a potential productivity of 20,000 tonnes of paper per year.

Purchasing and stockpiling of the raw material

The raw materials are mainly transported via road and generally come from waste paper. This material comes from the recycling centres and, after being accepted (having checked the documents, looked at the material and weighed it) it is stockpiled in the open yards between the buildings at the mill and the Torrente Pescia Minore. The waste paper comes in “bales” of different types of used paper and different types of contaminants (often plastic, little pieces of iron etc.)
Other than waste paper, Cartiera San Rocco uses, in the production cycle, virgin pulp – but in a lesser percentage as apposed to the waste paper. This also arrives in bales, but is stored inside the warehouse.
Another important raw material for the paper mill is water, which there is a collection point for at the derivation point of the Torrente Pescia Minore.
The mill also uses chemicals to add to the paste during the preparation phase. These are stocked in cubes, bins or bags, according to their form, in a special area which is protected in case of spillage.

Preparation of the paste

The bales of waste paper are picked up from the yard, the metal wires (or other fastenings) are undone and is put on a conveyor belt which transports the paper into the high density pulper. Once the water has been added, the paper is crushed as much as possible using a mechanical action which lasts about 20 mins per batch. Each batch uses about 2 tonnes of waste paper and 18 tonnes or water which comes from the clear-flocculation cycle (or from the source during the start up phase of the mill)
During this stage the cellulose pulp fibres are saturated and separated from the contaminants, a good number of which, however, stay suspended inside the mass.

Separation of the plastic

After the pulping the paste has to go through a dense paste purifier, especially for waste paper. In fact, after having been in the pulper, the paper, with the added water and other products that turn it into pulp, is then treated to eliminate the impurities, such as small pieces of iron and waste material with a high specific weight. This process improves the quality of the paste. The polymeric contaminants (essentially various types of plastics in the waste paper, such as additives, impurities, stationary items etc.) are removed by using another machine which is called the “Separ Plaster”, which separates the matter thanks to a physical principal (spinning).
Once the treatment has been done, the paste that has been obtained can be used, in the following stages of the production process, as in any other paper mill.
The finished product obtained at this stage is called “suspension” and is made up of fibres suspended in a watery liquid at about 4%.

The paste that is made by the pulper must undergo another mechanical process which is called refinement.
The aim of refinement is to increase the links between the fibres to make the sheet solid and resistant.
A sheet of paper that has been made with refining the fibres generally has scarce mechanical properties, is very bulky and has an irregular and cracked surface. Other parameters which can be altered thanks to refinement are: dullness, porosity, permeability, printability etc.
These variations in the paper’s properties are to be found in the changes that each fibre undertakes during the refinement process.
During this stage, the fibres are squashed and then cut, which is aimed at making them more plastic, flexible, and moreover the fibre’s surface often has thin fibres showing which means they are fibril. This makes the fibres come into closer contact between one another and the characteristics of machine resistance will be exalted in the following stage of the sheet formation. 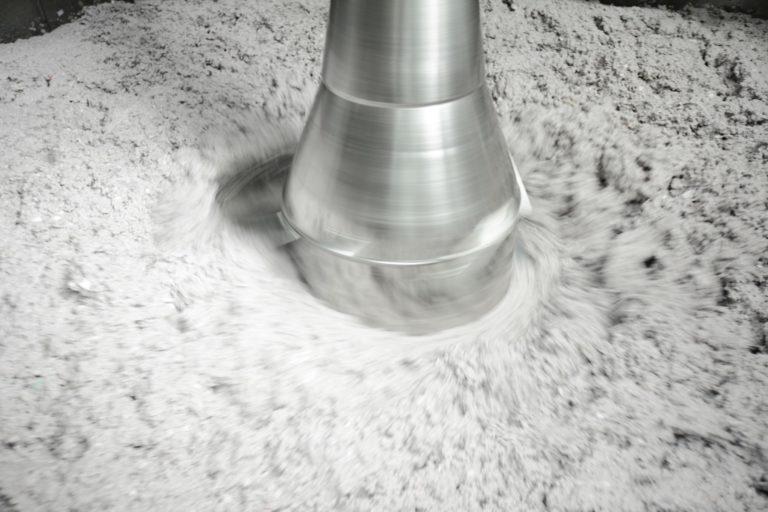 Recovery of fibres and water

When the pulp fibres are diluted large quantities of water are required. The water requirement is currently satisfied by using the water from successive working processes (from under the flat board) as well as water that has not yet entered the productive process. This also a considerable saving of pulp fibres because the waste water contains large quantities of suspended fibres and other matter. There is also a considerable reduction in the drainage water, seeing that the water is reused in the production cycle. The waste water collected during production, before being put back into the process, is first treated using a drum thickener and then an external flotation unit.
The thickener drum separates the most prestigious fibres - which are sent to the machine container – from the fibre remains, which are then sent to the floater unit for a second chmical and physical recovery process.
The floater produces two types of output through separation:
A first stage, made up from clarified water is used the spraying and pulping of the paper.
A second stage, made up of “mud”, consists in a fraction of reused water with a high content of waste and impurities, destined to be discarded and a fraction of water that will be sent back to the plant container.

The formation of a sheet of paper

The additives are put in the mixture at the first stage of the actual converting process and consists in mixing the cellulose pulp raw materials as well as possible with the other non fibrous natural materials.
At this stage the mixture is diluted considerably, for technological reasons, to about 0.5% fibre.
This operation, which involves huge quantities of water, is done by using recycled water from other stages in the process and from the flotation plant. This allows a considerable water saving due to the fact that this recycled water has a high content of suspended fibres and other matter which reduces the pollution of the tributaries, the consumption of raw materials and the natural resources. Following the addition of the chemicals such as artificial starch “drive substances”, which are needed so as to obtain the desired physical characteristics for the paper, as far as resistance, softness, whiteness, printability etc. are concerned. The suspension is stored in the two 60 m3 containers which feed the round the clock machine where the sheet of paper is made.

In this stage the remaining impurities are removed so as to obtain the best possible purity in the finished paper.
The selector is a perforated basket which lets the diluted mixture through and any particles which are larger than 0.2mm stay in the basket and are then sent to the vibrating sieve, which collects the fibres from the impurities which will be disposed of.

Distribution of the paste mixture

At this point the sheet of paper is made (which is the finished product of this process) from the fibres, which has been refined, mixed, purified and diluted. In this stage the fibre mixture, which has been obtained from the above mentioned processes, is taken to the round the clock machine and the fibre suspension is transformed into a continual sheet form.
During this stage the suspension cycle has already been prepared so as to generate paper with the desired chemical and physical requirements. The mixture has also been mixed, the additives added and diluted to a concentration that can be around 0.2 – 0.5%.
This level of dilution is indispensable for the felting process, which is when the pulp fibres are welded to give cohesion and resistance.
The paste mixture and the water are distributed by the head box in a thin sheet which is 3m wide, with uniform characteristics.
The formation web, which is a never ending strip which wraps around 8 cylinders which make it rotate continuously, has the fundamental role of the mixture loose a large quantity of water which also favours the fibres in the pulp to join together.
The first stage of the formation of the sheet of paper takes place in the wet area of the round the clock machine. This is made up of:

So that the sheet detaches from the web, it still has a high quantity of water in it.
The level of wetness can vary according to the type of mixture and the grammage, but it is normally about 60 to 80%. At this stage the sheet is delivered by the felt and is passed through the “pressers section”, in a section that is steam heated, commonly known as the “drying unit”, which has the job of dehydrating the sheet down to about a 5% water content.
The drying unit is made up of a series of steam heated drying cylinders which complete the drying to the technical specifications of the end product;
When the sheet leaved the drying unit it is immediately wrapped around a core which supports the paper.
This is how a reel of paper is formed. A reel weighs about 800 or 900 kilos.

Preparation of the final product

The reels need to have determined sizes and weight for the market. The outgoing reels produced on the round the clock machine are then taken to the rewinding area, where the sheet is wound onto a core, which is normally made out of cardboard, according to the required size. In fact, according to the customer’s requirements, this stage of production has a system which carefully measures the tension of the wound paper.
At this stage the reel is weighed, wrapped with cellophane using a rotopack.

The reels, which weigh from 500 to 2000 kg and are as tall as the longest possible machine length, are stored in the Warehouse with the finished products and are transported by special fork-lift trucks.
The transportation of the reels is delegated to external hauliers.

Manage Cookie Consent
To provide the best experiences, we use technologies like cookies to store and/or access device information. Consenting to these technologies will allow us to process data such as browsing behavior or unique IDs on this site. Not consenting or withdrawing consent, may adversely affect certain features and functions.
Manage options Manage services Manage vendors Read more about these purposes
View preferences
{title} {title} {title}